As the result of a newspaper advert about starting a club for enthusiasts of vintage tractor and engines, a meeting was held in the home of Alan T Condie. He was treasurer of the National Vintage Tractor and Engine Club and was keen to see if it was possible to get a club going in this area.

Approximately 6-8 people attended this meeting, as a result the first meeting of the club was held in the Lovat Hotel Perth where more enthusiasts appeared.

The club was known as the Tayside Group of the National Vintage Tractor and Engine Club.

In the spring of 1979 the club broke away from the National Club and became known as The Scottish Vintage Tractor and Engine Club. The 1979 and 1980 rallies were held at West Inchmichael Farm Errol, but after the 1980 rally being known as the “Year of the Mud” it was decided to look elsewhere for 1981 and get away from the clay ground.

For the next four years the rally was held at Lochlands Farm Forfar. In 1984 the Forfar By-pass was to go through the field so again we were on the search for somewhere else to hold the rally. For a few years during the early years of the Club the other main events were auctions, which were held at Hays Mart Perth.

While we were on the lookout for a new venue, it was suggested trying Scone Palace. Lord Mansfield was approached and a meeting set up with him, which in due course led to the 1985 rally being held at Scone Palace. During the years we have been made most welcome and with the rally going from strength to strength, we are very pleased with the site.

Shortly after starting the rally and getting in contact with the estate, we were fortunate enough to get space at Innerbuist Farm, which belonged to Scone Palace Estates. This was not far from the rally field and we kept some items, which the club had started to acquire. We were in those premises for two years when parts of Balboughty Farm become available. As these were bigger premises we moved to Balboughty Farm where quite a bit of time was spent knocking down pig stys to make room for club equipment. It was also possible for some club members who had nowhere to keep their tractors and engines to keep them here.

For a few years we held auctions at Balboughty, we now hold an Open Day in May and a crank up in December at these premises for club members. 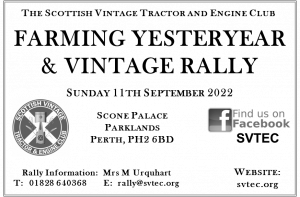